Kerala State Film Development Corporation Ltd (KSFDC), was established in the year 1975 with the prime objective of facilitating the production and promotion of Malayalam Cinema which was then virtually monopolised by a few studios in and around Chennai. 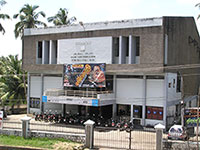 In 32 years of its existence, KSFDC, the first public Sector Corporation for film development in India has crossed many a milestone.

The Chitranjali Studio Complex, inaugurated in 1980, was truly a pioneer in introducing the latest film technology in South India . A large number of films made here have earned national and international accolades

The Corporation also owns an exhibition network with 11 fabulous theaters spread all over Kerala. Some of these theaters regularly host the International Film Festival of Kerala(IFFK).

KSFDC is the sole production agency for documentary film and video programmes for Government of Kerala. The Documentary and Short Films produced by KSFDC have won many State, National and International Film Awards.